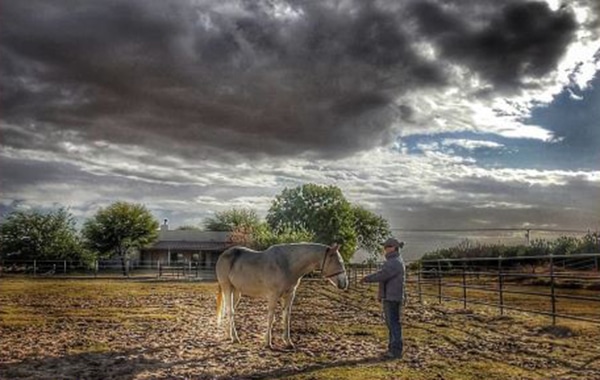 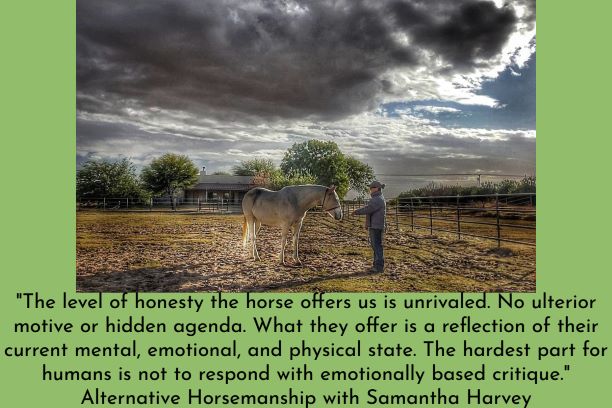 Horses have tugged at the heartstrings of the human race for centuries.

There is something awe inspiring about the emotional connection we can share with a horse.  That idyllic partnership is far easier imagined than experienced, with unexpected challenges and a steep learning curve along the way.

For many women, time with their horse is used as an emotional outlet, or sanctuary from life’s demands. They tend to initially make emotionally based decisions.  If they do not have the skills and ability to recognize when the horse is asking for help things can quickly become overwhelming.

People can enjoy the magic act, but they know that there is a “catch” or that something more is happening than what meets the eye, causing the “trick” to seem like magic.  The reality is a rational explanation can break down how the trick was done, dissolving the illusion of the magic.

People view horses in the same way.  They recognize more is happening than what they understand. If someone does not understand how to read the horse, or how to have effective communication with their horse, they can begin to feel at the mercy of their animal.

These horse-led experiences start to whittle away at a person’s confidence and their ability to make immediate decisions, especially during stressful occasions.  The person becomes defensive when handling their horse, creating anticipation in both themselves and the horse. Anticipation can trigger fear appearing in the human and horse partnership.  Unfortunately it isn’t until things have gone really wrong, before people seek guidance or help.

Along the journey of horsemanship, finding a supportive coach or instructor can be another unexpected challenge.

Sadly, what I call “ego-based-training” options are a dime a dozen.  These are teaching methods with promises of quick fixes and initially appeal to the riding community.  But these approaches tend to leave holes in the human and horse’s education. Below are some of the common scenarios with instructors who are trying to get things done “quickly” versus with quality.

Instructors or trainers that lack the ability to appropriately adapt how they present quality instruction for students are limiting the usefulness of the information they are sharing. Professionals who are unable to clarify details with the specifics as to the how’s, whys, when’s, and what’s, leave room for misinterpretation by the student.  The teacher who rushes the student, or is degrading and abrasive in their tactics increases stress levels in the student. This can lead to an overwhelming, emotionally draining experience, increasing the student’s concern and fear, rather than decreasing it.

Trying to function with these emotions and anticipating continual critique from the instructor affects both the human and horse’s mental availability. Anticipation leads to anxiety and stress.  If the person experiences these emotions while attempting to learn, how much are they actually absorbing from a lesson?  Afterwards, will they be capable of retaining the knowledge and applying it when working with their horse on their own?

Along with these emotions, other factors such as physical limitations due to age, worries about potentially getting hurt, etc. can weigh heavily on the mind of novice adults and returning adult riders alike. And so the vicious cycle begins.  Humans and horses become weary of one another, with anticipation, defensiveness and fear about the upcoming experience.

The dream, especially in the case of women, of having that emotional connection with the majestic animal, unravels into a reality of anxiety and turmoil.  And yet, if folks were taught the necessary skills, like how to support the horse versus challenging the horse, these experiences could be avoided altogether.

How do I get my horse to quit spooking?

So that brings me to one of the most common fear-triggering experiences for a rider, and one of the most undesired behaviors in the horse: “How do I get my horse to quit spooking?”

In terms of a spook or dangerous behavior, the question is focusing on the undesired physical outcome. This is like looking at a car crash and saying “I wish that didn’t happen,” rather than asking, “What factors contributed to the car crash, and were any preventable?” Such as having bad breaks, a loose steering column, or if someone was distracted while driving…

If after ruling out potential pain factors or health issues in the horse, (which are frequent contributors to dangerous horse behavior), we change our own focus from the negative and unwanted physical movement to a positive approach of prioritizing creating a mental willingness and availability in the horse.  This influences a shift in the energy, mindfulness and presence of a person when working with their horse.

Let us change the focus from trying to fix or contain the symptom (the spook) and exploring instead the potential root causes.

What if rather than waiting to offer our opinion until the moment of peak stress levels, we offered input proactively? Our goal is to decrease the potential mental and emotional buildup in the horse that can potentially lead to an over-reactive-ness.

What do I mean by proactive? If you began each session assessing the horse from the moment you arrive in the pasture, stall or paddock, you would learn to read the horse’s initial mental and emotional starting point for that day.  This will then “tell” you what you will need to do in that session to help influence a shift in his thought and body. By addressing the horse’s brain first, then his body, we can usually find answers as to where and when a shift in subtle behavior appeared, initiating the horse’s concern.

If a horse is stressed on the inside, his brain is far away from his body and he can seem very distracted, and unable to acknowledge your presence.

A common approach in this type of scenario is to make the horse physically move more and faster, thinking this will help get the horse’s focus, the old saying, “I will make him move his feet to get his brain with me.”

By doing this, people are actually “filling” their horse’s cup of what he can handle, until it becomes too full. Then “all of a sudden” the horse spooks, explodes, etc. Yet, it wasn’t all of a sudden.

If you slow down and learn to interpret your horse’s behavior, even in the most “boring” scenarios there are many emotions horses can be experiencing, even if they aren’t acting big and dramatic.

The little hurry in their walk, the busy-ness with their head when standing still, the constant movement or swinging of their hind end when groomed and tacked, the tension in their jaw, neck and back as the saddle is put on, the inability to stand for mounting, locking up their body unwilling to be led forward, the pulling or heaviness on the lead rope or rein, etc.

None of those seemingly insignificant, unwanted behavioral physical resistances are the issue. They each are signals as to the horse’s fear, worry, anticipation, etc. When he is bothered on the inside, he’ll get physically more dramatic on the outside. Traditionally, folks are taught to ignore the busy-ness, “Oh, they just do that,” or reprimand it- lunge, desensitize, etc.

What does this teach the horse?

When he is having a problem, or is concerned, he either is ignored, or reprimanded and may even have more pressure forced upon him at the moment of his discomfort. So what happens in the future?

Each time that horse’s cup starts filling, does he look to the human for guidance? No. He “handles it” by getting bigger, faster and increasingly frantic, as he reaches a point of being overwhelmed. I see it ALL the time. It doesn’t matter the breed, training, background or discipline. People are “taught” to ignore the horse until they can’t.

This isn’t about repeating something mindlessly over and over. Repetition can do two things, it either causes them to mentally shut down and check out-seemingly quiet- until you change something and then they “suddenly blow up,” or you are continuing to put them in overwhelming scenarios that overwhelm their mind (i.e. then the spook happens.)

So what can you do?

Start the conversation and building the foundation before emotional build up in the horse.  Learn how to address the horse’s brain first. Help him learn to literally look where he is going (folks are amazed how many horses never literally see what is in front of them due to anticipation), before he moves.

Reassess both his and your understanding of pressure and how you communicate with him from the ground. Can you influence his brain, then movement? Does he mentally check in with you or his brain a half mile away from his body? If he isn’t mentally able to “hear” you, and he is defensive towards how you communicate, his stress will continually increase, and the more overwhelming the world becomes, until he has to literally run from it.

Some personal goals for you can include:

With your skills developing and improving, you will learn to read your horse, and recognize his thought before he commits to a behavior.  This takes away the “wondering when he will do something” or the “suddenly” moments and builds your confidence.  The horse will learn to think through a bothersome moment and to “check in” with you, offering you an opportunity to direct how he should handle something.  This increases your safety at decreases the chance of dramatic reactionary behavior.

By you offering this support, clearly thinking through the unknown allows the horse to learn how to physically soften in the moment of unknown or stress, rather than build in defensiveness and tightness.  When he learns to relax because of your guidance, it will decrease his defensive reactivity- without you “making” him doing anything. The more thoughtful and confident the horse is the less reactive or “spooky.”

This isn’t a quick fix.

It requires a commitment and mental presence from you.  Learning how to have emotional empathy and clear leadership forces  folks to reevaluate the perception of the partnership with their horse. In the long run the rider gains clarity, positive leadership skills, timely decision making abilities, effective communication and participates in the partnership supporting the horse, contributing to what makes those amazing, emotionally fulfilling moments. 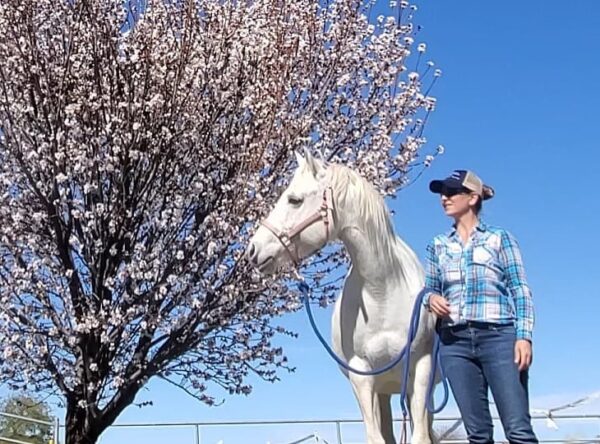 Sam developed her Alternative Horsemanship training approach over the past three decades of working within various facets of the equine industry. She starts colts, rehabilitates “difficult” horses, and finishes horses for both the show arena and pleasure riding. She works with both competitive and pleasure 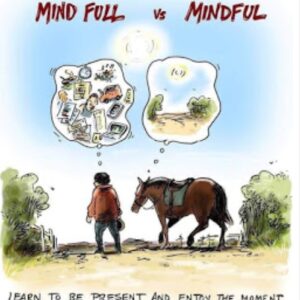 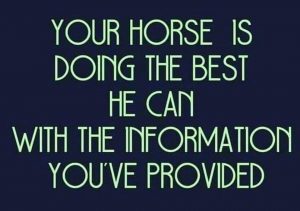 Alternative Horsemanship with Samantha Harvey shares three liberty videos of various aged horses that were once defensive and dangerous. 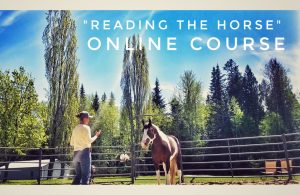 7 Horses 7 Days 17-Minutes Videos Who: All horse folks wanting to learn to recognize and read horse body language and behavior in order to learn how to work towards creating a respectful and fulfilling equine partnership. Why should I take this course? Many horse

Inspiration When You Need It Most 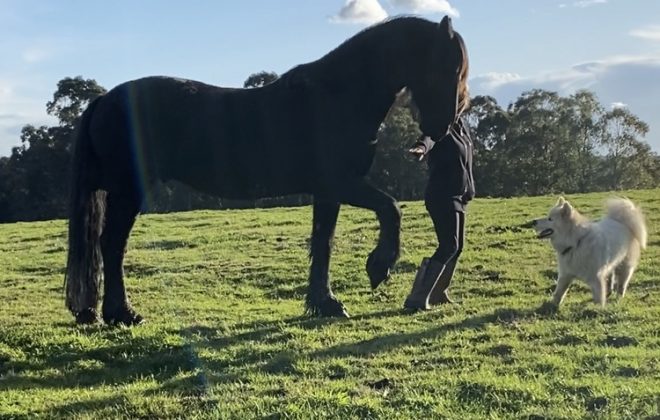 by Kim Thompson Dyer
In Basics Connection Useful
$75.00
Add to cart
has been added to the cart. View Cart